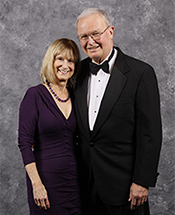 James A. Mitchell is the retired Chairman and CEO of the IDS Life Insurance Company, a subsidiary of American Express. In 2008, he was named one of the "100 Most Influential People in Business Ethics" by Ethisphere Magazine, a global publication dedicated to examining the connection between ethics and profitability.

Linda R. Mitchell grew up in Des Moines, IA and graduated from the School of Journalism at the University of Iowa majoring in Public Relations. After graduation, she moved to New York City where she worked in the Executive Training Program at Bonwit Teller, a high-end department store chain, using her sales and public relations training.

During the ensuing years after marrying and having two children, she continued to use her writing, speaking and public relations skills at an advertising agency, a career management services company, and an executive search firm. In retirement, she and Jim love to travel and dote on their four granddaughters.